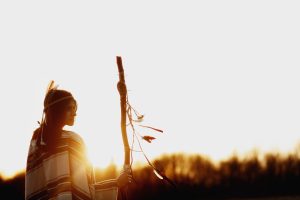 That would be the cliche way to start something like this. And in all honesty, it’s probably exactly how I would’ve started this if it weren’t for one small problem: we don’t really have a definitive definition for shamanism.

I would love to tell you what the world’s most trusted dictionaries define a shaman as, but they’re going to give you very different answers.

According to English historian Ronald Hutton, by the 21st century there were four different definitions in use:

In conversation, however, the word Shaman often is a lot more vague. The Shaman is a figure regarded much like the priest or the spirit guide: someone with a connection to the supernatural or ethereal who guides and protects you on your journey.

When I say Shaman you’re probably thinking of something vague, something a lot more mystical and ancient – maybe a monk. I want you to forget these preconceptions; reduce the definition of Shaman down to its bare essentials.

If we think of shamans as anyone with more knowledge about something that helps you along your journey, it becomes immediately clear how important these Shamans are to everyday life.

Your school teachers were your Shamans. Your priest or clergy members. The adults in your family. The salesman at the store who guides you towards the right computer to purchase.

Most importantly, what we now call healthcare is what shamanism was centuries ago. Before we knew about the existence of microscopic organisms like cells or germs, medicine men and witch doctors knew that certain substances could induce healing in the human body.

In fact, some of the substances these ancient shamans used to open up consciousness and heal the mind are the same that modern-day shamans—in the form of healthcare professionals—use every day, all around the world.

Psychedelics like psilocybin, ayahuasca, and even more modern substances like ketamine can be pathways to strange worlds. But taken in the wrong amount and surrounded by the wrong people in the wrong environment, it might not be a pleasant trip.

This is where the relevance of shamanism remains even today—to heal, you need to have trust in someone more knowledgeable who can guide you along the way.

Why is shamanism relevant to ketamine infusions?

Ketamine, in this sense like every other substance in existence, can be used for good and for bad. It is used in therapeutic situations for the treatment of mood and pain disorders, but it’s also heavily abused as a club drug.

I hesitate to call it “dangerous”; such a word reduces our discussion on ketamine to another anti-drug PSA from the late nineties. But it can be dangerous. Should it be feared? Not necessarily, but it should be respected.

It’s a paradox that lies at the center of human existence: that which gives us life can kill us in higher doses. Sunlight gives energy to plants, which become food for animals, which becomes the nutrients we need to survive. But too much sunlight can lead to burns and a lifetime of burns can lead to skin cancer.

Does this mean that you need to be acutely aware of how much of a substance you’re ingesting all the time, no matter what? No, not really. It means you need to listen to someone who knows more about it than you do.

Experts recommend a certain amount of sunscreen; nutritionists tell you how to lead a balanced diet. But most overlooked is the role of the healthcare professional—the modern-day shaman—to provide you with the right amount of these life-changing substances. This requires us to give away the most difficult thing a person can: trust.

Trust in others who may know more than you. There is no weakness or shame in admitting that you can’t fix something on your own, and there is grace in reaching out to others and trusting them to help you along the way.

The post Shamanism in the Modern Age appeared first on ketamine.news.