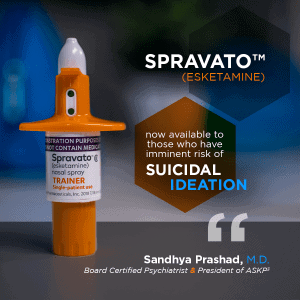 A new indication of Janssen’s ketamine based-nasal spray Spravato (intranasal esketamine) has been approved for rapid reduction of depression symptoms in those with major depressive disorder who have imminent risk of suicidal ideation, according to Houston-based psychiatrist Sandhya Prashad.

“The original indication for treatment-resistant depression meant that patients had failed treatments before. This is more for emergency cases” detailed Prashad. “It opens the door to the idea that this is a great treatment for severe depression with suicidal ideation. Traditional antidepressants can take weeks to start working. The availability of a medication that can start to reduce symptoms within one day is very significant.”

Spravato was first approved by the FDA strictly for patients with treatment-resistant depression, requiring at least two medication failures, and insurance often required patients to have three or four medication failures before this treatment was an option. This new approval opens the door for those with the most severe symptoms to be treated even if they have not failed multiple treatments.

Prashad, along with many of her colleagues and contemporaries in the industry, hopes that this will open up more leeway for providers to allow more at-risk individuals to receive this important new treatment.

“Ketamine or esketamine shouldn’t be the last line. It doesn’t have to be a last resort.” Prashad further detailed how ketamine and Spravato are so vital for treatment of depression with suicidal ideation. “This is a unique property of ketamine, this quick reduction in depressive symptoms that translates into reduction in suicidal thoughts. This is potentially life saving for some patients. Many of our patients will say that even if they still feel depressed after a ketamine infusion, they no longer feel like they want to attempt suicide. It’s an effect only seen with ketamine. Other treatments in psychiatry do not have this rapid, robust effect.”

This new treatment could not come at a more pertinent time. In 2017, suicide was the tenth leading cause of death in the United States, claiming the lives of over 47,000 people per the CDC WISQARS Leading Causes of Death Reports. This is more than twice the amount of homicides in the United States in the same year.

Ketamine was first synthesized in the early 1960s and has seen extensive use as an anesthetic and pain reliever since then, but new research in the last two decades has revealed its potential as a treatment for mood and pain disorders. Some doctors and medical professionals such as Thomas Insel, former Director of the National Institute of Mental Health, are saying ketamine may be “the most important breakthrough in antidepressant treatment in decades.”

Sandhya Prashad, MD – Dr. Sandhya Prashad, board-certified Psychiatrist based in Houston, has specialized in treatment-resistant depression and has been using ketamine in her practice since 2016. She is the founder and medical director of Houston Ketamine Therapeutics and Houston Deep TMS Therapy (www.sprashadmd.com) A graduate of Baylor College of Medicine for both Medical School and Psychiatry Residency, she has presented on the national level at conferences regarding the use of ketamine. She is a founding member and the President of the American Society of Ketamine Physicians, Psychotherapists, & Practitioners (www.askp.org), which is a non-profit organization created to advocate for the safe use of ketamine for mental illness and pain disorders and to expand access to ketamine therapy. Dr. Prashad was also named one of Houston’s Top Doctors by H Texas Magazine for 2017, 2018 and 2019.

About SPRAVATO® – SPRAVATO® (esketamine) CIII nasal spray is a non-selective, non-competitive antagonist of the N-methyl-D-aspartate (NMDA) receptor – an ionotropic glutamate receptor. It has a novel mechanism of action, meaning it works differently than currently available therapies for major depressive disorder (MDD).

SPRAVATO® is approved in the United States, in conjunction with an oral antidepressant, to treat adults with treatment-resistant depression (TRD) and depressive symptoms in adults with MDD with acute suicidal ideation or behavior. SPRAVATO® has been submitted for health authorities’ review for TRD and adults with MDD who have current suicidal ideation with intent in other markets around the world, including Europe. The FDA granted Breakthrough Therapy Designation to esketamine nasal spray for TRD in November 2013 and for MDD with imminent risk for suicide in August 2016.

About the Phase 3 Studies – ASPIRE I and ASPIRE II evaluated the efficacy and safety of SPRAVATO® in addition to a comprehensive standard of care in adult patients with major depressive disorder who had active suicidal ideation with intent. This is the first global clinical program to study this severely ill patient population, who have been typically excluded from antidepressant clinical trials, addressing a great unmet need. Patients were defined as those with major depression and active suicidal thoughts with intent. Every patient was treated with a comprehensive standard of care in both trials to safely and ethically conduct the studies. The comprehensive standard of care included initial hospitalization, a newly initiated or optimized oral antidepressant and twice-weekly treatment visits for four weeks.

The primary efficacy endpoint of the double-blind, randomized, placebo-controlled, multicenter studies was a reduction in depressive symptoms at 24 hours after the first dose, as measured by the Montgomery-Åsberg Depression Rating Scale (MADRS). The MADRS scale is a tool used to assess severity of depressive symptoms, allowing clinicians to evaluate 10 symptoms on a six-point scale to produce a total score of up to 60 points. A secondary efficacy endpoint measured improvement in severity of suicidality as measured by the revised Clinical Global Impression of Severity of Suicidality (CGI-SS-r), a seven-point scale developed by clinical experts that is a measure of the severity of suicidality as judged by the clinician’s global impression.

How is MKW-Institute dealing with COVID-19