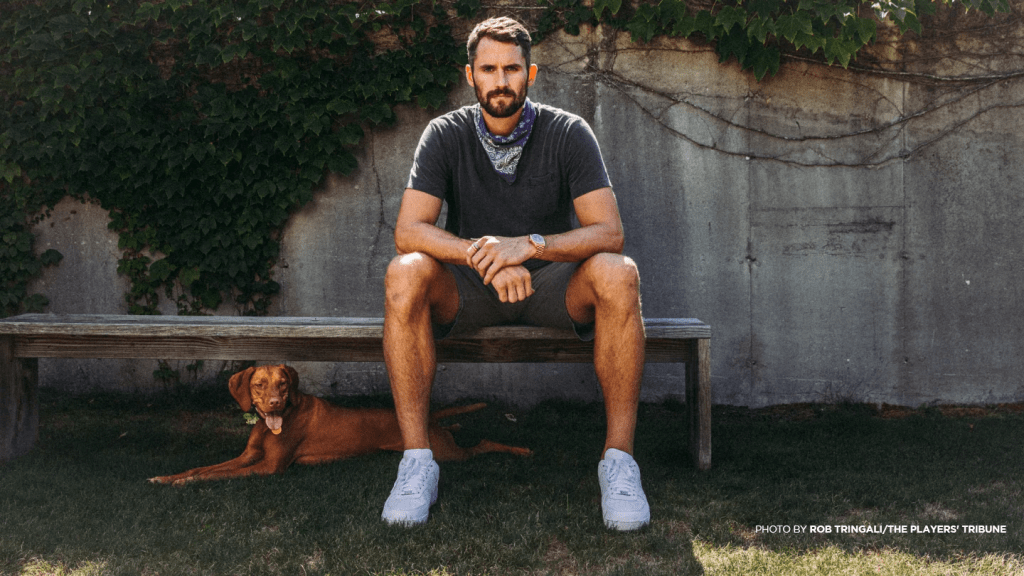 Being depressed is exhausting.

That’s one of the cruelest ironies about mental health. When you’re in a dark place, everyone around you — all your friends and family — they just want to see you doing what you love again, being happy, being “the old you.”

Sometimes it feels like the world is looking at you saying things like, “Come on, man, just get over it. Don’t think like that. Just move on.”

But what people on the outside don’t always understand is that it takes all of your strength and willpower just to exist. Just to keep on going. Battling depression, battling anxiety, battling any mental health disorder … it’s all just so unbelievably exhausting.

That’s been on my mind a lot lately, considering the millions and millions of people around the world who have lost their jobs, or lost their loved ones, or who are just dealing with the unprecedented anxieties of being a human in 2020. I know so many people out there are suffering right now. I’m no different. I’m still going through it. Even after all the work I’ve tried to do on myself over the last two-and-a-half years, some days are just brutal.

Let’s just call it what it is. Some days are total shit, right?

It feels good just to say it.

Even in the best of times, my default setting was often dread. That’s just the way I’ve been wired since I was a kid. It’s like there’s a constant, low-level threat that I can sense in the pit of my stomach from the moment that I wake up in the morning. It’s like this white noise humming in the background, and it’s saying, Something bad is going to happen, any second now. That sense of dread would often be amplified by something in the news or by social media, and at any point could send me into a spiral.

My way out was always basketball. But I don’t mean that in some cliché way — where I would go to the park, roll the ball out and suddenly everything would be O.K. It was a different kind of thing entirely.

The best way I’ve ever heard it described was in the HBO documentary on Robin Williams after his death. He was talking about the only way he could combat his demons was to wake up in the morning and ride his bike until he had absolutely nothing left in the tank, and then at night he would go up on stage and do a two-hour stand-up set and just pour all of himself into it — every single ounce of himself, until he was just totally wrung out, mentally and physically.

That resonated with me so much. Ever since I was a kid, I’d often put myself through hell in the hopes of numbing my mind. I used to think of it as going into my “pain tank.” If I wore myself out to the point of exhaustion, then I’d be mentally on empty, too. It was like I had to wring myself out completely so that at the end of the day I was just blank.

Everybody who goes through mental health issues has a unique story, but for me (and I think this is probably true for a lot of people), my entire identity was tied to one thing in a really unhealthy way. Way before I was in the NBA or even in college, my self-worth was all about performing. I was what I did, which I think a lot of people can relate to, whether they’re a chef or a lawyer or a nurse or whatever the profession. I just happened to play basketball.

When I wasn’t performing, I didn’t feel like I was succeeding as a person.

I didn’t really know how to be comfortable in my own skin. I could never just be unapologetically Kevin, walking into a room. I was never in the moment, alive. It was always the next thing, the next game, the next, next, next. It was like I was trying to achieve my way out of depression. And so I guess it’s not surprising that some of the darkest moments of my life happened when that crutch of basketball got taken away.

This is still hard to talk about, but I feel like it might resonate with people out there who are going through something right now. People who have lost their jobs (and their sense of purpose) during this crisis. People who … I don’t know … maybe just need to hear this.

Everybody knows about my anxiety attack during the Atlanta game back in 2018. That’s become, over time, easier to talk about. Especially with the overwhelming support that I’ve gotten. In a way, it’s almost ironic that I’ve become known for this one incident, because that was the first and — thank God — the only time that I’ve experienced a debilitating panic attack in public like that. But that moment, as terrifying as it was, was just the tip of the iceberg, in a lot of ways. It was the culmination of years and years of me suppressing a lot of issues. I’ve never really talked about the other side of my mental health issues, which is a much more complicated and subtle battle with depression.

Five years before the panic attack that everyone knows about, I was probably in the darkest period of my life. I’d only played 18 games with the Timberwolves that season, breaking my right hand twice, and that was when this whole … I guess you’d call it a facade or a character that I had sort of built up …. it all started crumbling. I was in a cast. My identity was gone. My emotional outlet was gone. All I was left with was me and my mind. I was living alone at the time, and my social anxiety was so bad that I never even left my apartment. Actually, I would rarely even leave my bedroom. I would have the shades down most of the day, no lights on, no TV, nothing. It felt like I was on a deserted island by myself, and it was always midnight.

Just … dark. Dark and alone with my thoughts. Every. Single. Day.

And I want to make it clear that I know how fortunate I was, compared to most people. I knew then and I know now. I didn’t have to worry about my bills, or kids, or anything like that. But none of that mattered. My whole sense of purpose was tied to my job, and with that gone, every little thing that went wrong, no matter how small, just started compounding and compounding.

That’s the thing that people on the outside don’t fully understand. Nothing major has to happen to start a spiral. It can happen over the smallest thing in the world. Because when you have depression you can fall apart at any moment disproportionate to the circumstances.

It got to the point that year where I was simply paralyzed with depression. And of course, I’m not about to show my weakness to anybody, right? I was tucked away in my apartment, and nobody could see me suffering. The only time I would leave my apartment was to work out, because that was the only place where I felt like I added value to the world, period. To those around me, I would put on a brave face.

Fake facades are hard to keep up.

The future started to feel meaningless. And when it gets to the point where you lose hope, that’s when the only thing you can think about is, “How can I make this pain go away?”

I don’t think I have to say much more than that.

If it hadn’t been for a couple of my closest friends, I don’t know if I would be here today telling my story. And 99.9% of the people in my life probably don’t know how bad it got for me. But as hard as that might be for them to hear, I feel like I need to get that off my chest for the people out there who might be in a similar situation right now.

When I was sitting in that dark room, I just couldn’t see how things were ever going to get better. And if there’s somebody out there right now who is reading this — even just one person — who is sitting in that same dark room, having those same thoughts….

All I can say to you is this:

You would be amazed at how freeing it is just to talk to somebody, and tell them the truth about what you’re going through.

And listen, I’m not trying to sell you some fairy-tale version of mental health. It took me years and years — hell, it genuinely took 29 years for me to realize what I needed.

I needed medication. I needed therapy.

I still need those things now, and I probably always will.

There are still days where I look at social media, or I see the news, and my anxiety gets triggered. But sometimes I get triggered by almost nothing at all. Just simple negativity is enough to start a spiral of overgeneralization.

Oh, my coffee was shit this morning? I must be shit. I’m a horrible human being.

There are days when I don’t want to get out of bed. That’s just the truth. And that’s why I wrote this.

I think that sometimes — because of all the incredible support I’ve been given, and because of my platform as an NBA player — people see me as some kind of Finished Product. Or some kind of Success Story for Mental Health or something. They see the curated version of me, and not the real person.

The real person’s story didn’t end when the Cavs won an NBA title, and suddenly it was all good, and then the credits rolled, the end.

You don’t achieve your way out of depression.

No, as sweet as it was to win an NBA title for the city of Cleveland, that wasn’t the happy ending. That was my job, which is now a different thing from my identity and my self-worth. One of the best days of my life happened after I started working through my issues with a therapist, and I walked into a room for the first time and I was just 100% my authentic self. I was comfortable in my own skin. I was alright with just being Kevin. I wasn’t thinking about the next thing. I was just in the moment, fully alive. And I can tell you from experience that you can live for years, but not be really alive and fully present for 30 seconds at a time.

If you would’ve told me back in 2012, when I was at my lowest, that I would ever feel at peace like that, walking into a room, I just wouldn’t have believed it. I was coming off a season where I was an All-Star, All-NBA, and won a Gold medal at the London Olympics. But I was completely unaware of the darkness that was about to consume me.

Look, I’m not trying to sell you some happy ending. All I can do is just be as honest as possible about a really dark period in my life.

So here it is.

What do you need?

That’s the question, isn’t it?

I spent 29 years trying to figure it out.

What do you need?

For me, I guess what I needed was to talk to somebody.

For me, what I needed was to know that I wasn’t alone.

If you’re struggling right now, I can’t tell you that this is going to be easy.

But I can tell you that it does get better.

And I can tell you that you are definitely not alone.

The post To Anybody Going Through It appeared first on ketamine.news.